The Trails and Tribulations of Tinkering in the Makerspace, such as Learning All that Goes into Making Books 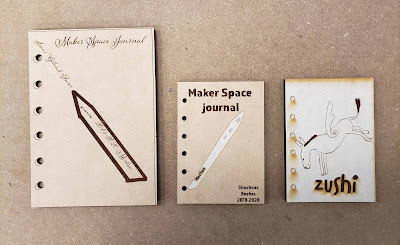 Turns out that Tinkering in the Makerspace, one of our after-school programs led by preschool teacher Emily Schoenberg, involves hard work. When the class began in the fall, Emily showed the students, a group of 5th and 6th graders, around the Makerspace to see what would spark their interest. The doughnut maker, found in a "Miscellaneous" box, caught their eye.

"Can we make doughnuts?" they asked.

Sure they could, but first, insisted Emily, they had to plan what kind of doughnuts they wanted to make. And how does one plan? One writes down ideas, sketches drafts, takes notes. And where should those notes go?

How about making their own journals to hold all their ideas? Emily suggested, inspired by an Introduction to Commercial Print class she was taking as part of completing her B.A. in Graphic Design at Arizona State University Online.

The kids were all for making their own journals.


Thus, the Tinkering in the Makerspace class embarked on learning about making books. 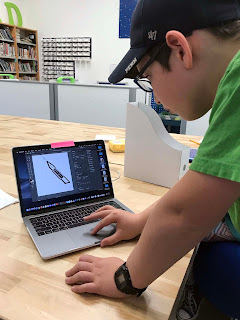 First step was to design the book covers.


The kids made three drafts on paper before deciding which one to go with. Initially, Emily heard a lot of "I can't draw," until she assured the kids that drawing just meant organizing shapes. Then they used an iPad with a pen to trace their drawings in Illustrator, which provides more control to perfect the design and later upload it to the glowforge, the lasercutter software and device used to cut the covers on draft board. The kids added text, picked out fonts and typefaces, and laid out the cover design, discovering during the process what makes a cover visually appealing and easy to read. Emily made sure the designs would read well in the glowforge.

She was surprised when a student wasn't interested in watching the laser cutter actually execute the design but then found peeling the paper off the printed cover "very satisfying." 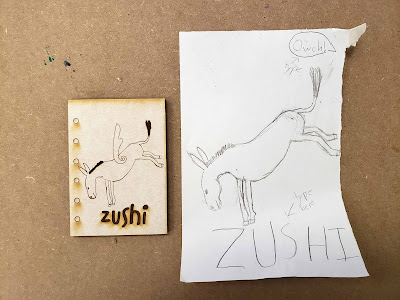 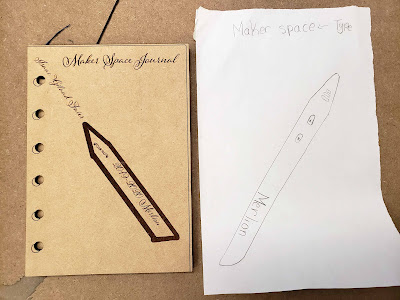 The next step for the kids was folding big pieces of paper into signatures.


In printing, signature is the term for the sheets of paper folded and sewn together that make up a book. The kids learned about the different ways to order the pages, the math behind the folding, and idiosyncrasies of printing, such as that page 1 and 2 are not necessarily next to each other when creating a signature.

Cutting, folding and sewing were a challenge.

"There's been a lot of complaining throughout this project," says Emily.


"Even the most persistent student doubted himself in the beginning," she adds. "I try to distract them when they are in complaining mode and then, before they know it, a step is completed and they are proud they did it." 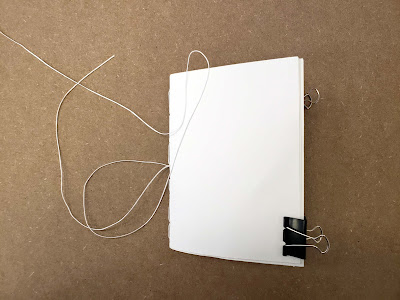 Kids sewed their own signatures, where you don't necessarily see where your needle is going but, Emily assured them, “your brain knows what it’s doing.”

"Once they can see that they can do it, they're more confident," she says.

Mainly, the kids learn patience in this class.


It might be about bookmaking, but what they are really learning is that things can’t be created or done in an instant. You have to follow a process to achieve an end result. Even machines, like the 3D printer, take time, sometimes a long time, to produce something.

Next step is binding the books, and, of course, just in time for Chanukah, actually making some doughnuts!