In 7/8th grade Jewish Thought class, students were tasked to find and discuss manifestations of Jewish values in contemporary media. Each student chose a media clip (from TV, movies, or songs) and then found a Jewish value to showcase using the clip. The class learned about never giving up from Derrek Rose, taking a positive look at anger from Dr. Who, and following, about how Forrest Gump might just be a modern day Moses.

Excerpt from the presentation of a 7th grader:

Scene chosen: After a month of roaming around Vietnam in the rain, Forrest Gump, his best friend Bubba, and their platoon get ambushed by the Viet Cong. They are told to run. But Forrest, being Forrest, runs as far and as fast as he can. Eventually he realizes that he has gone too far. So he turns around and runs back to get his best friend, Bubba.
While running back, Forrest finds an injured soldier and realizes that he can’t leave him there, so he picks the soldier up and brings him to a nearby river bank that is out of the general combat area. Then he runs back to save Bubba. But on his way, he finds another injured soldier and carries him to the river bank. This happens three times. On his fifth way back to get Bubba, Forrest finds his injured Lieutenant  giving the order, via radio, to Napalm-strike the area, which will barbeque the whole jungle. Forrest picks up Lieutenant Dan even though he tells Forrest to leave him there. This time, Forrest gets shot and falls down on his way back with Dan. But he just gets back up and brings Dan to the river bank. Then he turns around to get Bubba even though Dan tells him not to. Forrest finally finds Bubba with a bullet in his chest. He picks him up and brings Bubba to the river bank and misses getting hit by the Napalm by only a few feet. Sadly, despite Forrest’s efforts, Bubba dies in his arms by the river bank. 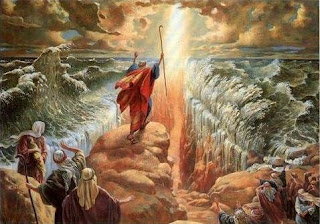 Forrest Gump and Moses: During the Exodus story, Moses runs away from Egypt because he has killed an Egyptian; this would be like the Viet Cong trying to kill Forrest while Forrest runs away. Forrest is like Moses; he has gotten away from the enemy and he is safe.
When Forrest runs too far, it is like Moses running away to Midyan. When Forrest runs back into the jungle to get Bubba, it is like Moses going back to Egypt to get the Jewish people out. When Forrest finds four injured soldiers on four runs into the jungle, he picks them up and brings them to a nearby river bank that is out of the main battle area. This is similar to when Moses takes the Jews out of Egypt, meaning that the soldiers represent the Jews and the river bank represents the Sinai Desert.
On Forrest’s fifth run into the jungle, he finds injured Lieutenant Dan and picks him up and starts running despite Dan telling him to leave him there. That part represents Moses bringing out the Jews who do not want to leave. When Forrest runs back into the jungle for the sixth time and finally finds Bubba, though Bubba is on the verge of death, Forrest picks Bubba up and brings him to the river bank while fire and Napalm close in on him. This represents the last of the Jews making it out of Egypt when the Egyptians are in close pursuit. When Bubba dies at the river bank, Bubba represents the Jews who don’t survive leaving Egypt.

The Jewish value: This scene from Forrest Gump shows the Jewish value of life. Unlike other religions, which place a value in death and the afterlife, Judaism places the most value on life itself. Judaism also places a great value on the survival of the group and the community. Moses goes back into Egypt to save his people, to save their lives but also to save them as a group. We can find the same value for life and community in Forrest Gump, who runs back into the jungle six times to save his fellow soldiers. He shows that we can risk our own lives to save our people.
Labels: Jewish Values Middle School