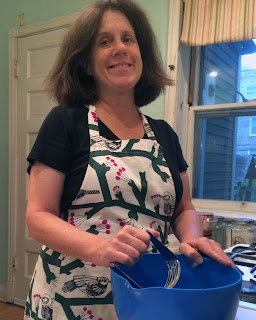 Pie has made me famous.


As the 2017 Blue-Ribbon Winner of the South Side Pie Challenge, I was featured on the South Side Weekly radio show, in the Hyde Park Herald and at the 61st Street Farmer’s Market doing a pie demo.

Everyone wants to know how to make a good pie crust.


With Thanksgiving around the corner, here are some of my pie-making tips, as well as a favorite recipe.

Pie crust should not be hard (as in solid). It should be flaky.

To achieve a flaky pie crust, use the right recipe (Julia Child is my go-to) and handle the dough as little as possible.

Spend a good amount of time “cutting” the butter and shortening into the flour, then sprinkle on the water and take a very short time to form the dough into a ball.

Remember that heat is the enemy of pie crust.

The butter must remain as solid (cold) as possible. A warm room can melt the butter, so can a warm counter top, as well as your warm hands. So work the dough quickly, form it into a ball and flatten it a little. That way, when you roll it out, it will already be in a circle.  You won’t have to roll and reroll the dough to get it into the right shape. Wrap and refrigerate it until it is firm (about an hour).

When you roll out the dough on a lightly floured surface, roll it as little as possible. Again, heat is your enemy. The less you roll, the more tender the final crust will be. If you are going to make a pie with a prebaked shell, freeze the crust for 15 minutes before baking.

For the filling my only tip is to make sure you bake your pie long enough so it won’t be runny when you serve it.

If your pie looks too soupy at the end of the suggested baking time, put some foil over the rim, so that the edges of the crust don’t burn and bake it for a few more minutes. Cool your pie completely so it is easy to serve.

There are no special tools needed to make pie. I do like to use a pastry blender (that's the tool I'm holding in the above picture) for cutting the butter into the flour, but a fork works just as well, it just takes a little longer. I also like to use a metal scraper for gathering up the dough from the counter.

Place the flour, salt and sugar in a large bowl, mix lightly with a fork.
Add butter and Crisco, blend using a pastry blender or a fork, mashing and mixing the butter and Crisco until the pieces are the size of oatmeal flakes.
Sprinkle the water over the flour mixture and mix with a fork until the dough just holds together.
Place the dough on a lightly floured surface. Using the heel of your hand, push the dough out and away from you until all the dough is spread out on the counter. With a scraper, gather the dough into a ball. Divide the dough in half, make each half into a ball, flatten each ball into a disk. Wrap each half in plastic wrap and refrigerate for an hour or longer.

When ready to bake, unwrap one chilled dough disk and place on a lightly floured counter. With a rolling pin, roll out the dough into a circle slightly bigger than your pie pan. Be sure to roll evenly and flip the dough over at least once during rolling so it doesn’t stick to the counter. When the circle is the right size, fold it in half and place it in the pie pan. Unfold the dough and gently fit it into the pan, making sure the crust is touching the bottom edge and sides of the pan all around. If some of the crust reaches above the rim of the pan, fold it over a bit. Gently push the top edge of the crust into the rim of the pan.

The following recipe is sightly modified from Mastering the Art of French Cooking by Julia Child, Louisette Bertholle and Simone Beck

In a sauce pan, combine Karo syrup and brown sugar. Boil until the sugar is dissolved. Turn off heat and add butter, stir to melt. Cool slightly.
Beat eggs lightly in a mixer. Add the eggs to the cooled syrup. Add vanilla extract and pecans.
Pour into the prebaked shell.
Bake for 40-50 (maybe more) minutes.
Cool completely before serving.