Every year, our preschool summer program chooses a creative focus.

This summer they decided on a study of murals, which are abundant in Chicago and particularly in our very own neighborhood of Hyde Park. 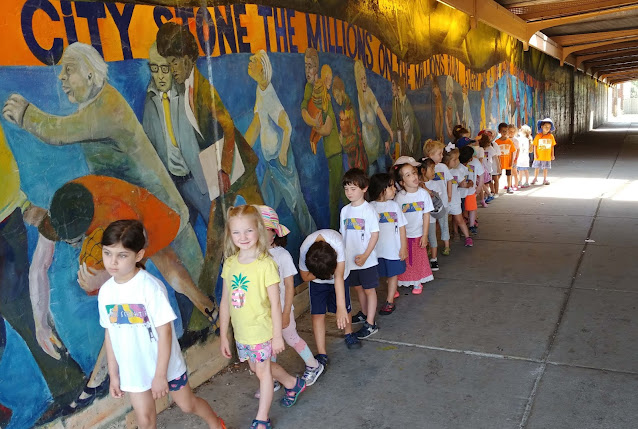 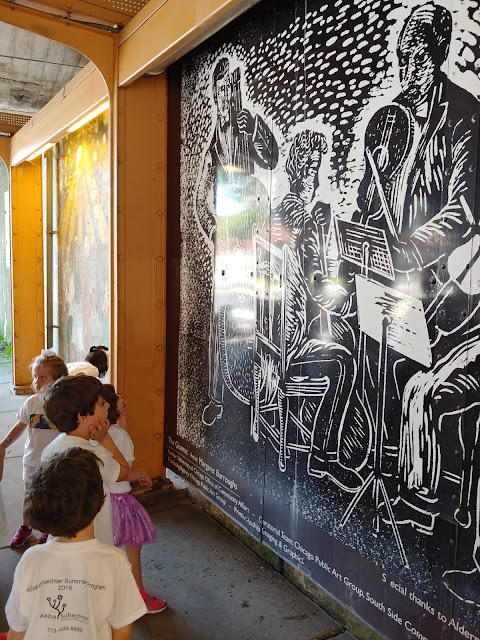 Naturally, this summer included field trips to view the murals in Hyde Park, such as a walk to the underpass at 55th Street.


However, one of this summer's biggest takeaways was that, to create a mural, you need to work as a team and collaborate.

Murals are big and thus require teamwork to create, especially if you’re a child. For example, our Big Kids on the Go Blue created a tree print mural by working together under the direction of our resident artist Susan Carton. 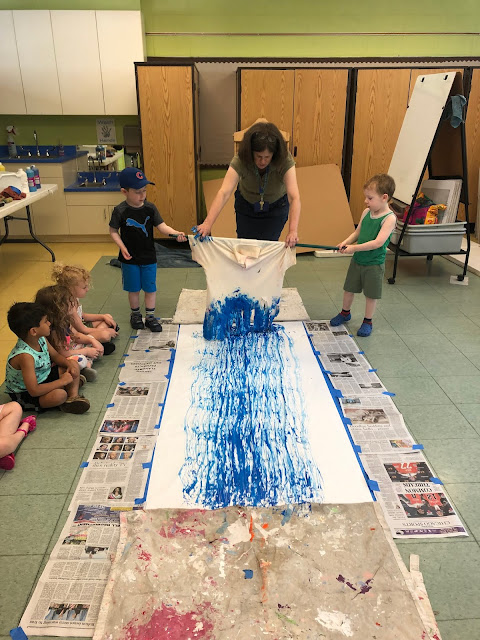 First the children paired up to use a special paint "brush" made by hanging a t-shirt from a broom handle. The class found the contraption looked like a car wash!

Working in pairs, each child held one end of the broom and together they walked the paint-soaked shirt across the paper. This was done several times with different groups of children until the big paper was covered in rich blue lines. 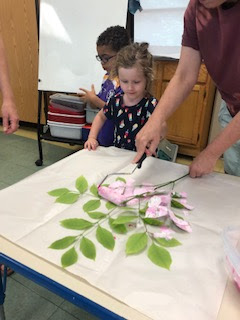 The next step was to make prints from a tree branch.

The whole team decided on the color of the prints. Then, in teams of two, the children rolled the paint on the branch and carefully placed it on the blue background to create the print.

Right at the beginning of summer, our Parent/Tot class began exploring painting a mural with foam brushes and blue and green paint. The next day, they used bottles and funnels, resulting in circular prints on the previous day's creation.

The entire school also worked with local artist Doug on a mural on big wood panels. 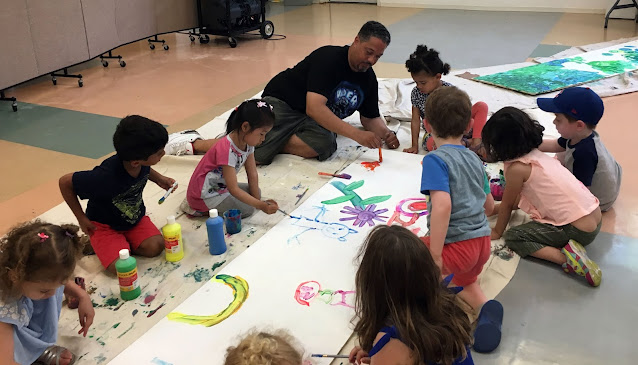 Each class created a different scene. It was striking how differently each group approached these enormous panels of wood.

Some classes abandoned the brushes and tools, and instead used their hands and arms to paint the giant surfaces. The Purple Big Kids on the Go used small brushes to paint their own portions of the large mural. The Blue Big Kids On the Go actually painted in absolute silence. 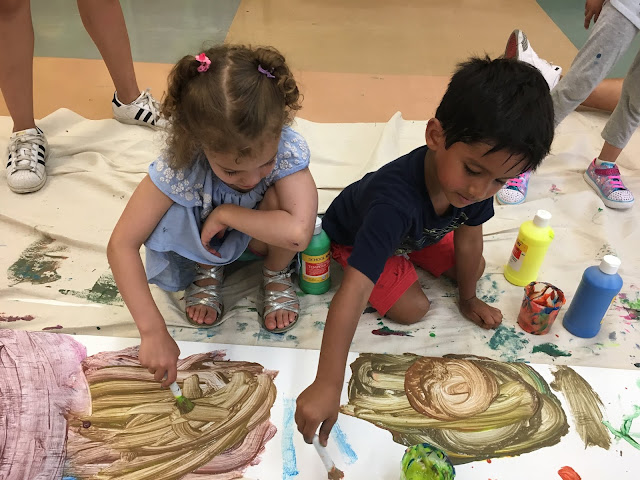 Eventually, we will display the mural boards from this project along the fence in the preschool playground, ready to welcome everybody when the new school year begins. 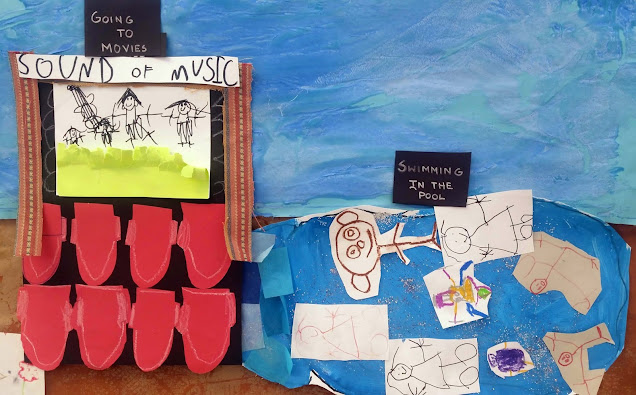 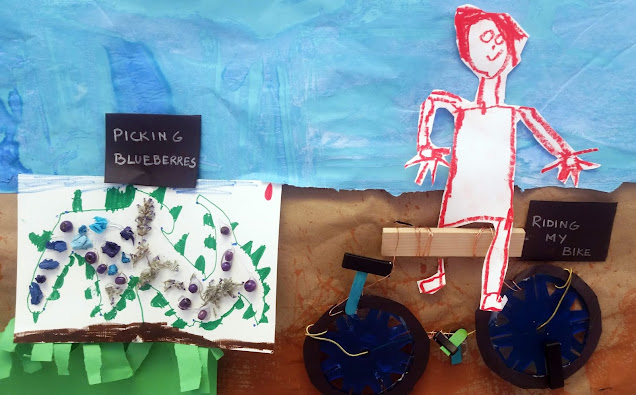 Another mural project asked the children to share of what summer reminds them.

They gathered materials and each one of them shared one particularly favorite part of summer. 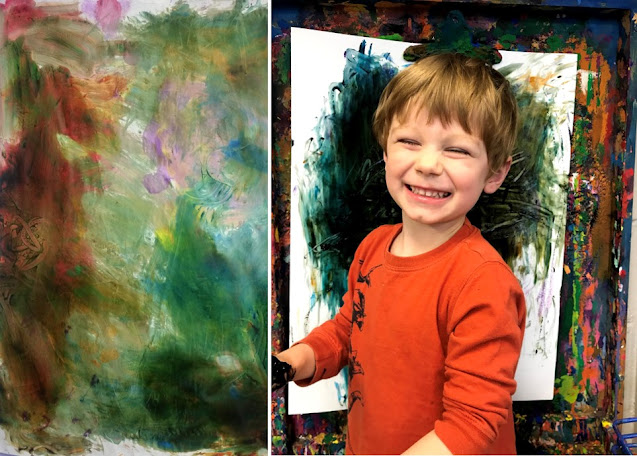 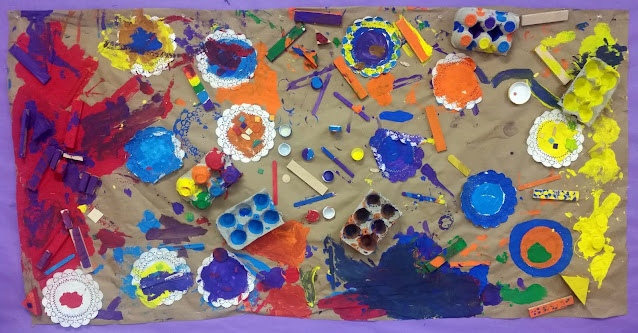 Our 3-year old preschoolers began their study of murals with fingerpaint, then moved on to including 3-D objects in another mural.

All through the summer, children learned to work alongside their friends to paint, draw, make a mono print and employ so many different art techniques.

We wrapped up this in-depth study with a grand gallery opening on Thursday, July 25, showcasing all the murals created over the summer.

The community effort was evident in the children's work, and the gallery really made all of this summer's learning visible for everyone.