What Makes a Good Leader? 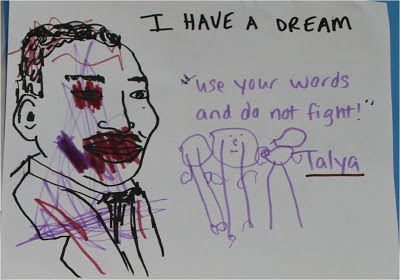 As we celebrate Dr. Martin Luther King Jr. Day, leadership has been a topic in our classrooms.

Preschoolers found that a good leader, like Dr. Martin Luther King Jr., wants to make the world a better place, and they came up with a bunch of ideas for doing that, such as such as using words and not fighting, not saying you can't play, and working to change rules that are not fair.

Students evaluated three potential "candidates" for the position of Jamestown Governor. They had to define the four most important criteria for this position and then rate each candidate based on those criteria. Students also had to come up with a scoring system. How can one measure leadership? Can it be quantified? 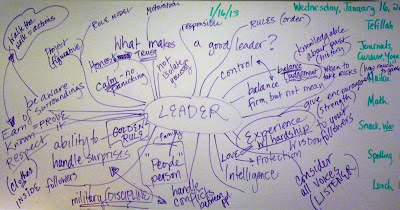 The project began with discussing what makes a good leader. Students had all sorts of responses, such as, a great leader:

knows when to take risks loves his followers
can discipline well
stays calm in emergencies
listens to all sides of a an issue.

They did disagree on some things, like whether it's important that a leader project authority and how one might do that. Some felt it was important to wear certain clothes and "look" the part; others felt that a leader who tries too hard will only undermine himself, and that a true leader lets his actions speak for him. Another source of contention was how honest a leader should be with his people. Should he reveal everything to them or withhold certain information? For instance, if the ship is about to sink, should the leader tell his people? Or is it better to keep that fate from them?

Meanwhile, a 7th/8th grade Tanach class has been discussing ancient Israel's wish for a monarch and their first king's struggles with his role. King Shaul was not automatically accepted by everyone, as he shied away from the spotlight and did not assume the role of leadership and strength that a king should. Shaul finally proved himself by strategically planning for and winning a war and in the process uniting all of Bnei Yisrael. The class spent some time discussing when a person should be humble and when someone must take initiative in a role of leadership. What was Shaul's role as king, and how he did he find the balance between his humble and modest personality, and his position of leadership?

All in all, it is fascinating to contemplate the aspects and challenges of leadership by studying different leaders at different times.