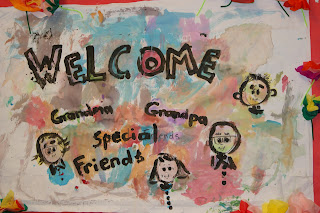 
Then I felt bad for never having bothered about Grandparents Day. Clearly, it meant a lot to a child. So, when the next invitation for Grandparents Day at my grandchildren’s school arrived, I took the day off, and I went. Of course it was wonderful to experience their school day, and as a teacher, it was interesting to see how another Hebrew School or Jewish Day School operated, how other Hebrew teachers taught. But I did not expect how nice it would be to meet other grandparents, and to share experiences with them. Now I have made my own friends where my children live. I believe that events like these, that create bonds not only between generations, but also within each generation, are especially important here in America because they foster that sense of community that will continue our traditions.
As a grandparent, I realized that you come to Grandparents & Special Friends Day not only for the kids, but for yourself.
Labels: Community Connection Grandparents